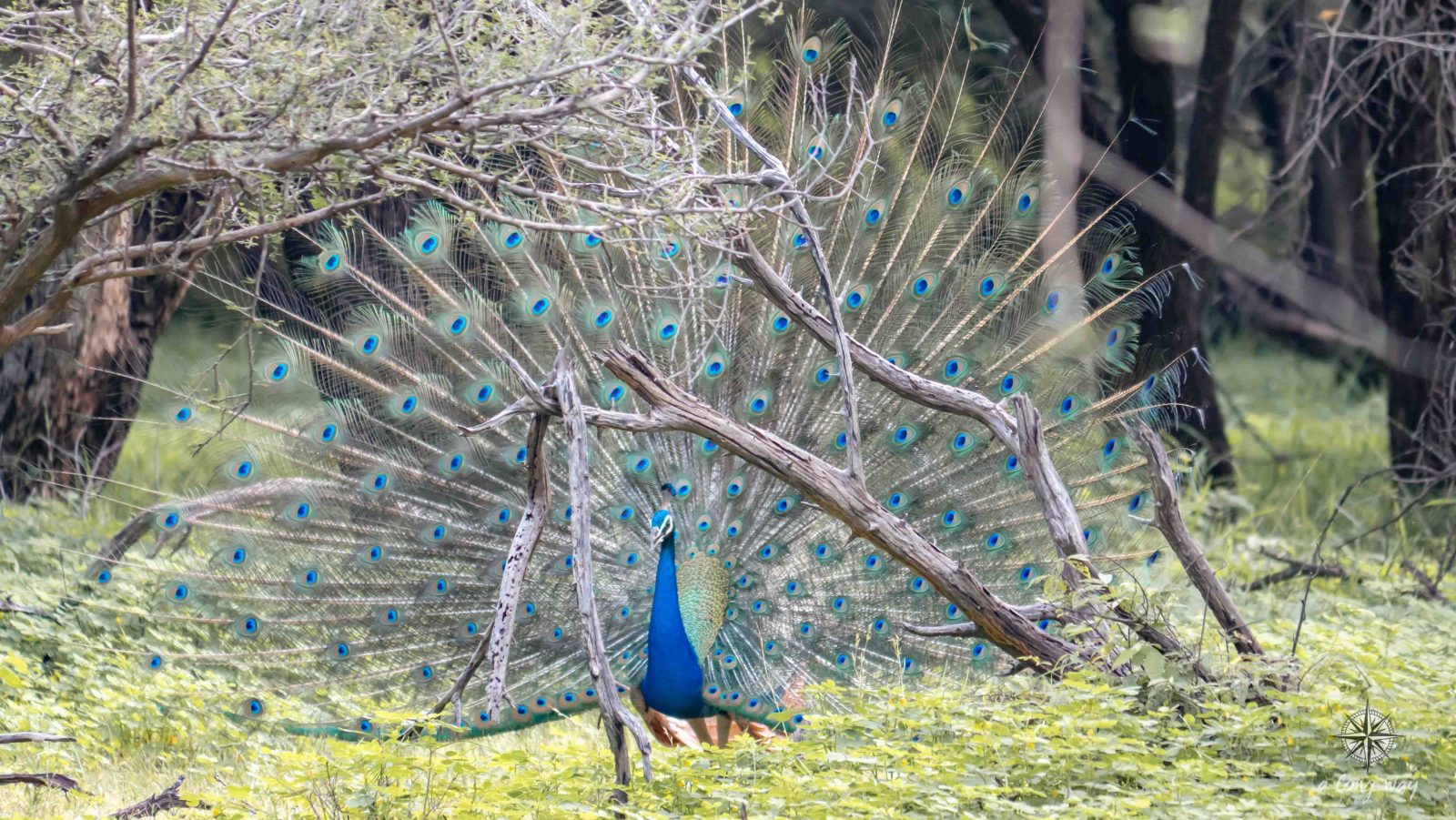 Unfortunately to go to this unique natural park you have to stay in Sawai Madhopur which is for sure not the nicest place you have ever seen. There is literally nothing nice to see or do in this city. So don’t make the same mistake as we did and take yourself a good hotel with a pool and a good restaurant and focus yourself on the safaris.

Day 1: The dancing Peacock
There was heavy rain in the afternoon and we simply hoped that it would end until we go on the Safari – and it actually did. And when we realized that the other couple was not coming and we therefore had a private safari with our driver and our guide who both were very knowledgeable and spoke excellent English, we were in heaven.

The main reason to visit Ranthambore NP are the tigers. But as you see them rarely in monsoon season, we didn’t expect them and focused on the beautiful landscape and the other animals. And shortly after entering we saw an entire group of spotted deer. They looked a bit like Bamby and also reminded us of the adorable Impalas we had seen in Africa. Afterwards we saw the Indian gazelle and soon our first highlight – a dancing peacock. We had both seen peacocks but never as they were performing their dance. The male bird had all his beautiful feathers spread up and was turning in circles while moving his tail. He did that while standing next to a group of females but unfortunately, they were more interested in feeding than in him.

We continued our search for tigers in other parts of the park but didn’t find more than foot prints. But we saw two beautiful birds – an Indian Roller and a Golden Orion. We were absolutely happy with our experience and the great job our two guides had made.

Day 2: The big cat
On our second day it rained even heavier but luckily it stopped right before we got picked up for our safari. This time we were with four members of an Indian family and therefore a bit squeezed in. The driver was an unfriendly guy who didn’t speak any English and our guide’s English and friendliness wasn’t much better.

We didn’t see any dancing peacocks and Indian gazelles but many spotted deer. Two young males were even fighting right in front of our eyes. Our driver was also fighting but mostly with the water. There was so much water that our jeep sometimes felt more like a boat than a land-based vehicle, but we made it somehow. We also quickly saw an owl, but as our guide was probably the worst guide we had ever experienced he didn’t see it and we rushed passed it. The only interest he and the driver had was getting home as soon as possible and therefore we drove out of the park after 1h and 45min instead of the promised 2.5-3h.

We insisted on driving back into the park to receive the full time we had paid for and didn’t care that this didn’t gain us new friendships. We first tried to find a Sloth Bear that another group had seen but weren’t lucky. But when we were already on our way out of the park our luck struck us. There were already two jeeps waiting and when we came closer, we saw this majestic animal sitting on a rock. It was a beautiful male Leopard warming up in the sun. When he started moving down from his rock, our guide and driver finally came to life. They drove us closer and we could observe how the Leopard reached another rock about 400m from us. It was still far, but we could clearly see him. He had a muscular body and his tail was super long. We glared at this fascinating animal for as long as we could before it disappeared into the bushes and we drove back to our hotel with a smile.

In the end we were more than happy we had taken this trip to the Ranthambore NP during the monsoon season as we will always remember its inhabitants.