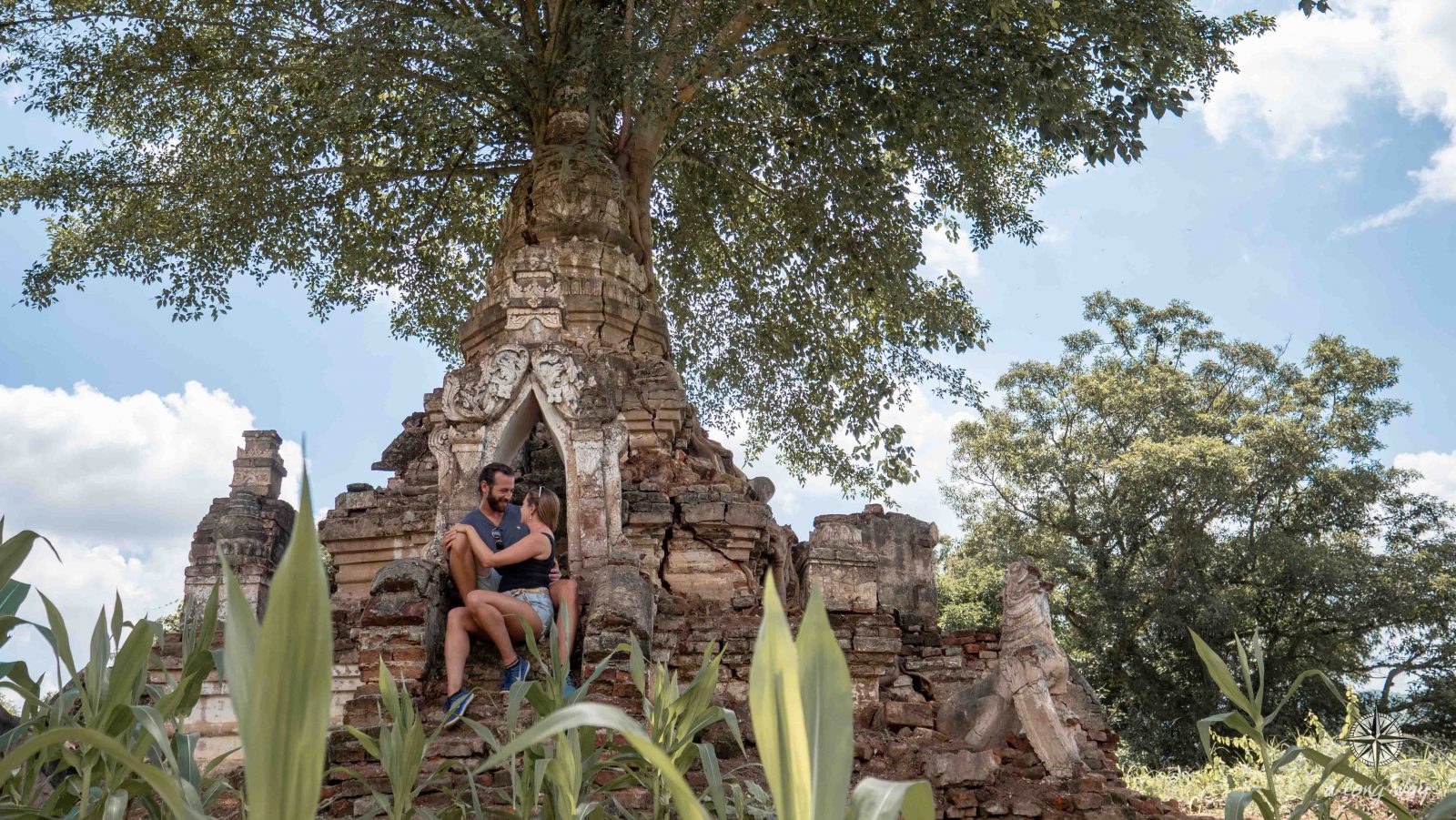 Hsipaw is a 4h bus ride north of Mandalay and feels so much different from the big city. First of all it is a small village within a beautiful landscape and secondly nobody is trying to sell you anything. The people simply smile and wave at you. Besides the beautiful people there are a few highlights not to miss on this trip.

Explore little Bagan
Maybe the name is overstating it a bit, as there are only a handful of stupas standing around. But this place offers two things its bigger brother does not. There is a lake full of Lotus flowers with a Buddha statue right in its center. And there is a stupa with a tree growing right out of it. The trunk of the tree goes so perfectly through the center of the stupa and its branches are forming a protecting umbrella over it, that it gives the appearance that it was designed that way.

Hike to the Nam Tok Falls
Depending on how far you are able to drive with your motorbike it is a 15min to 1.5h hike to get to the falls. The landscape is breathtaking and the falls must be impressive but it is also hot and exhausting and the path to the falls is not marked at all.

When we did that hike it was way too hot and we were sweating so much that we thought about turning around several times. But the believe that there would be a waterfall with a pool to swim in kept us going. But when we finally arrived at the falls there was no water. Not even a drip in the pool and so we had to turn around without being able to refresh ourselves. Fortunately, we crossed a little river on our way back where we could finally cool down.

Learn about the history of the last Shan prince
Because of the exhausting hike we didn’t make it to the Shan Palace in the afternoon. But we learned from our hotel manger and by our own research that until the military putsch there was a Shan prince looking over the area. He had studied mining in the US and came back with an Austrian wife and a completely new understanding of democracy. He gave a lot of the royal farm land to the farmers and provided them with tractors and new farming technics. Since his imprisonment during the military putsch he was never seen again but is still kept in high regards in the local population.

Take the 7h train ride to Pyin Oo Lwin
It is a scenic ride through the beautiful landscape of northern Myanmar. You drive through endless corn fields and forests and as a highlight there is an impressive bridge over a valley to cross during the second half of the ride.

As we wanted to have the local experience, we bought tickets for the ordinary class but quickly regretted that decision. Not because of the hard benches and the tree leaves whipping in, but because of the many drunk, misbehaving Burmese men. But when some of them left and the others felt asleep, the ride became quite scenic.

Soak in the colonial atmosphere
Because Pyin Oo Lwin is up in the mountains it was a preferred place by the British during the Burmese summer. It is cooler there and the British left some beautiful colonial buildings. The horse and carts you see moving people around even strengthen this colonial feeling.

The botanical garden, the blue Dee Doke Waterfalls and the 120m Anisakan Waterfalls we didn’t do. Reason was that it rained half the time we were there while ironically, we were afraid that there wouldn’t be any water at the falls.

Half a Million Buddhas